Bink had to be put to rest yesterday. Bink was an extraordinary dog, living far longer than anyone thought he ever would. He was probably 11 years old. We found him in our front yard in 1997, and discovered that he was blind and afflicted by some nervous system quirks that made him shake occasionally and gave him quite a personality. He was obstinate, perceptive, sensing, and quite loving. We would take him to the dog park and he would immediately find the biggest dog (how did he know?) and pick a fight with it. But he loved to curl up on the couch or bed with you and once he stopped spinning around he would finally settle down and sleep.

So after 4 years, I finally am updating our dog page. Bink and Chelsea are nice middle aged dogs now, and are doing just fine. Of course the stairs at the new place ruined Bink's back (ruptured disk), and Chelsea has had one operation on her back leg and may need another when the money starts flowing again. Whee! But they are pretty good looking, no?

The doggies love their new house, even though they had to learn to go on dirt instead of grass which is their favorite. Here's a picture of them taken while we were staying at Uncle Al's house. They are enjoying a refreshing snack of egg carton and stuffed hippo. 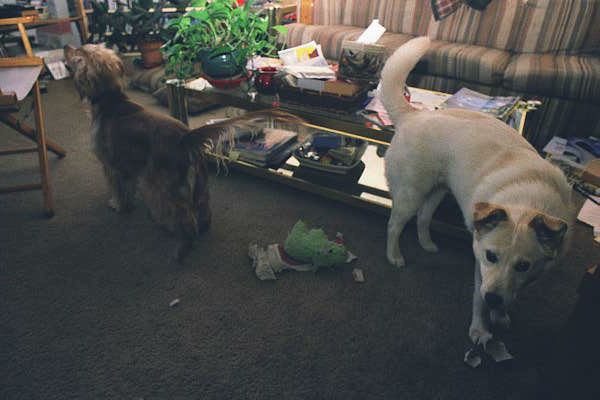 Ok, so we got busy. Bink is fine, and thank you all for your nice notes. He's a 25 pound adult now, and is responding well to his obedience training. He is still quite rambuncious and loves to prowl the house looking for different things to smell. We consider him the artiste in the family. If he's not in the mood, he will not eat. But he does enjoy a nice scritch under the neck. Here's a picture from a week ago. 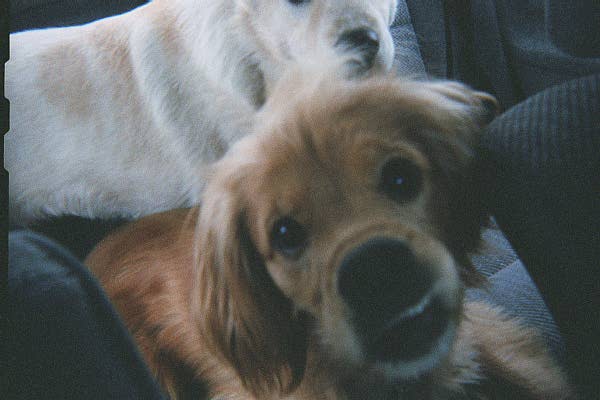 The really big news is that we got him a buddy from the Humane Society. Chelsea is an Australian Shepard or Cattledog cross who was born on 8/30/98. She is brilliant and stares at you intensely. She never passes up food. 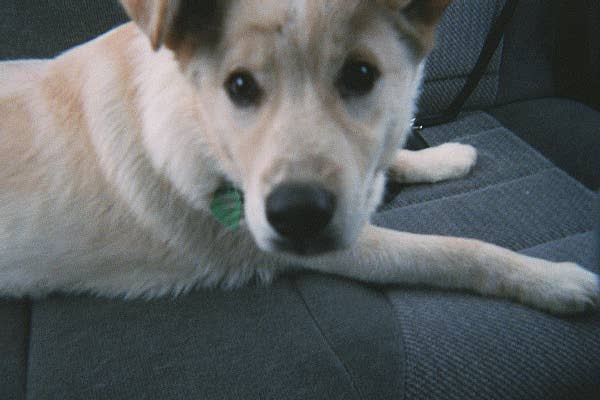 Well, no big news to report, except that doggie is getting a lot bigger. He's up to 14 or so pounds now and is showing signs of defiance.

This is a good thing, but it's probably time for training now.

I do have some more pictures! These are all from the beach trip a couple of months ago. He seems so small!

Hmmm. That last entry last month was all doom and gloom. It's kind of funny how things change.

The dog is a hellion. Like a two year old human, this 4 month old doggie spends most of his time alternating between testing us severely, and being a beautiful cute angel.

His shaking problem still exists, and it's gotten slightly worse, but it doesn't keep him from doing whatever he wants. He has discovered barking and digging, those fabulous things that make a dog a dog. The barking isn't too bad, especially if he's barking at a dog that outweighs him by 8 or nine times. And speaking of weight, he is now up to 11.6 pounds from the 6 pounds he was a month ago.

Last week we noticed that Bink's eyes were oscillating back and forth, and a little bit up and down. A day or so later, his head started wobbling, in a manner very similar to a person with Parkinson's Disease.

We took him to the vet last Sunday, and found out that these were signs of a degenerating central nervous system. It could be due to viral or traumatic causes, but that it was probably connected to his blindness. He warned us that it could degenerate rapidly, and there probably isn't much they can do for him.

We decided to continue to take care of him until the end.

So on Sunday, we took him to the beach. At first, the waves were very loud and scary, and running down the beach was wierd because it's like the stairs he sometimes slips on. But by the end of our short visit, he really liked running through the sand.

He also really enjoys riding with his head out the window of the car, getting all those wonderful smells turbo-charged into his nose.

This little guy "adopted" us on the 23rd of October. He was found in our front yard, dirty and covered with fleas. We decided to adopt him, as he had no collar, and appears to be blind.

We've named him Bink because he bonks into things all the time.

Things to get Bink:

Back to Bob's home page